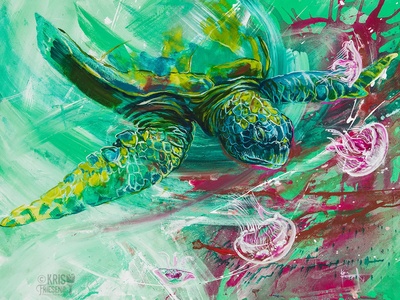 Quickly splashed out greens and magenta were spread out on canvas to make the painterly abstract expression in this painting, which started out as a fast artistic experiment during my stay at Sachaqa Centro De Arte. This painting made itself about one of the green sea turtles I spent time with in the Galapagos Islands, who was especially mellow and didn't mind my taking photos. 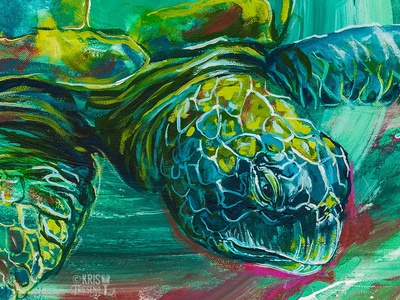 Spending a little time with the green sea turtles of the Galapagos helped me to appreciate these animals, one of which became a painting. Green turtles feed on seagrasses, and like marine lawnmowers, they help keep seagrass beds fertile and even add nutrients back once digested. Seagrass beds are important for many fisheries as nursery grounds for many species of fish and crustaceans. 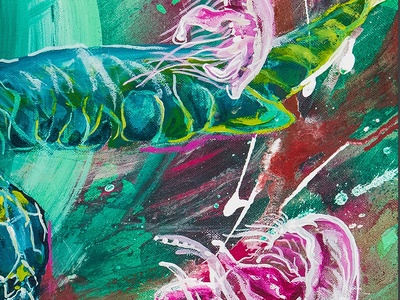 While green sea turtles are primarily vegetarian they do eat jellyfish at times, which helps keep jelly populations under control so they aren't blooming on beaches we swim in. Unfortunately turtles easily mistake jellies for plastic bags, balloons and other garbage, which we can fortunately help with. 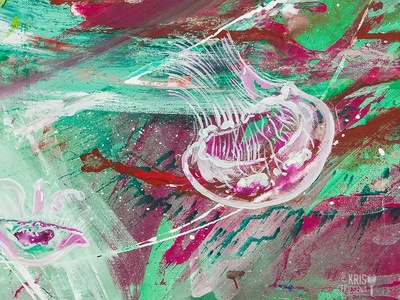 Jellyfish are painted overtop brush strokes and splatters of aqua green, red and magenta paint. I try to leave as much of my initial brush work alone as possible, deciding where to compliment the raw painting with hints of realism, in this case jellyfish. 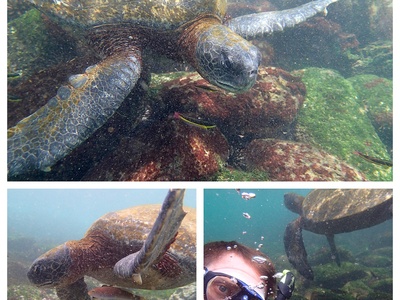 This green sea turtle found me snorkelling on the island of San Cristóbal in the Galápagos archipelago and was gracious enough to share my company for a little while. It's especially meaningful to me to create art about a species from my own photographs and experiences. 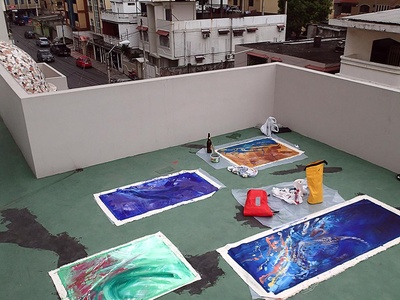 The green and red abstract painting on the bottom left became a sea turtle soon after this photo was taken, from the roof top of my guest house in Guayaquil, Ecuador. This was a magical afternoon of painting, complete with a swarm of thousands of dragonflies, after my Galápagos dive trip.