This mural began as an open call for artists to visually summarize the 7 habits in an educational context, and me having no idea what to do. After visiting the school and seeing the number of walls to be included I realized that the mural needed to have a consistent image to keep from being scattered, something that would tie it all together. An image of a pathway then came to me; one central path with smaller paths branching off for individual habits. From there I created an original sketch that started the mural process.

After my initial proposal I welcomed any input from teachers, staff, and students. I met most of the teachers at a meeting where everyone was welcomed to discuss what worked and didn't work in the sketch, with the general composition being far more important to me than individual details. As I told everyone involved, what really matters is that the viewer understands what's going on for each habit. I emailed revised sketches and continuing to talk with the staff to ensure we would get the best result.

This mural's style started with this one digital image from my portfolio that a school representative really liked. Going from this digital image I wanted everything to look pre adolescent; to be graphic with bold and colourful images that are neither realistic or flat.

The mural itself took a little over 3 weeks to complete and I worked nights so that I wouldn't interfere with the school schedule, and became known as the “nocturnal bat artist” to the students. I painted a couple days until noon so that classes could visit me while I worked and ask questions.

While the 7 habits are obviously the important theme here it's important that kids can identify with any scene, so I made sure to emphasize that we're here in St. Albert. As you can see the background includes different landmarks of St Albert: grain elevators, the school, and the town itself. The path we're on in the mural moves from rainy prairie to sunny tropical mountains with a rainbow, which suggests a challenging future goal to be achieved.

Leader In Me Mural

To live and see the habits everyday is a goal for us at Ronald Harvey! We have worked with an artist Kris Friesen who created this beautiful mural. Below are the mural drawings that Kris has prepared.

“It isn’t just a pretty picture,” said principal Janet Tripp. “Having that visual coming in is really welcoming.”

She added that it helps the students to see what being a leader looks like.

The multi-wall mural shows a schoolyard scene where children are engaged in various activities that demonstrate the seven different principles behind the school’s new philosophy.

At the beginning of the 2011-12 school year, the teachers and students started following a new program called The Leader in Me that was started by Stephen Covey, author of The Seven Habits of Highly Effective People.

Students are coached about the practices behind being proactive, how to synergize and what it means to think win-win, among other things.

The mural shows a child planting seeds on the left side of a garden plot and watering plants growing out of the right side. This illustrates the notion of beginning with the end in mind.

Creating “7 Habits” When I was first contacted by Ronald Harvey Elementary School in St. Albert about painting a mural in February incorporating their “7 Habits” educational program I had no idea what to expect.

After meeting with the cheery staff I quickly found out that they wanted murals–that wouldn’t compete with each other–showing “the 7 Habits of Happy Kids” on six different walls confined to the school foyer.

The path moved through the town of St. Albert with cloudy unpleasant weather towards a sunny tropical scene with a rainbow, symbolizing a final ultimate goal.

The mural project had to be finished in time for a February school assembly that included the mayor, so I worked until the last minute before taking part in the unveiling ceremony. 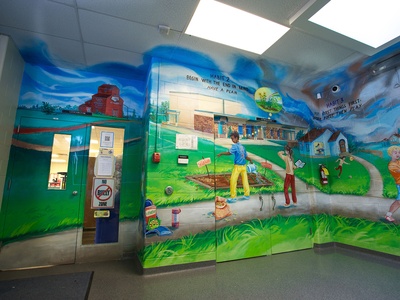 The 7 Habits School Mural In Progress 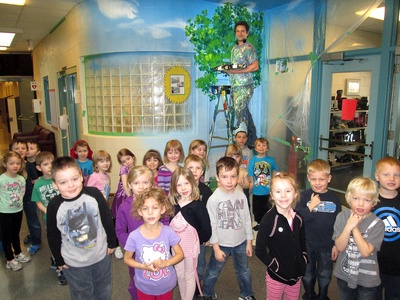