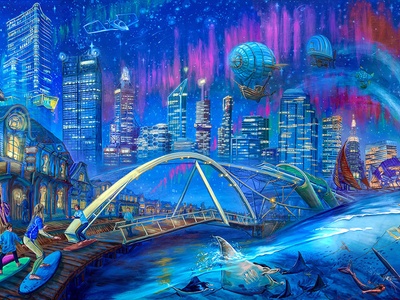 The finished mural is installed at the Aurora Charter School in Edmonton. The sister mural, “Natural Harmony” shows different scenes of nature and wildlife with some humans in the background under the Northern Lights. In comparison, “Urban Harmony” brings scenes of past and present using buildings and cities, with people/children and some animals in the background of the Southern Lights. 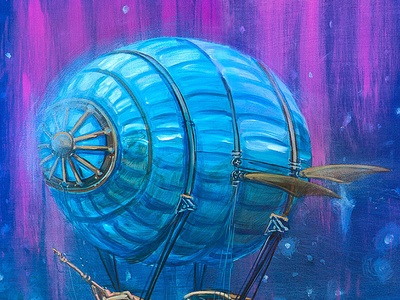 A fantasy inspired air ship is painted flying over the modern skyline in mural. Mixing fantasy and reality in an artwork is great fun, and from the Hindenburg to the Graf Zeppelin there have been many dirigibles over time. This air ship doubles as an actual ship that could float on the water, and if you look closely you might see Conan the Barbarian as captain at the wheel. 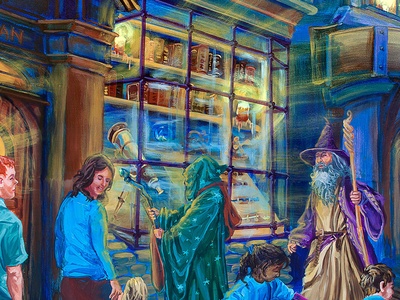 A mother and daughter investigate a Harry Potter inspired scene of wizards gazing into the display of a magic wares store with magical wands, books, orbs and even a telescope. The store has a sign overhead reading "Knowledge Emporium" as I wanted to encourage young people to learn that knowledge is it's own kind of magic. Recognizing that learning can happen everywhere, nearby, kids are also learning how to surf. 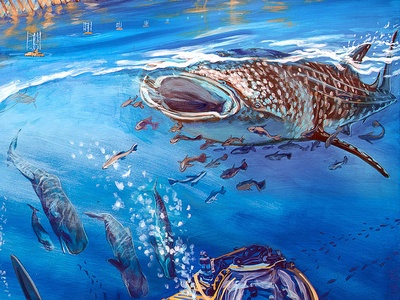 A whale shark swims over a deep-sea submersible, which is heading off the picture with the hope of inspiring future oceanographers. A pod or family of sperm whales, including a mother and calf, dive nearby while the future Perth Opera House graces the shore with contemporary architecture. 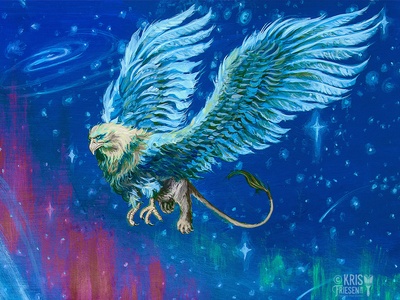 This might be the first griffin I've ever painted since grade school, so it was a welcome fantastic beast to capture in the painting! It's always a challenge to try and give believability to characters of fantasy, especially arial creatures where gravity would require wings many times the size of the ones shown here. There's only so much space per mural. 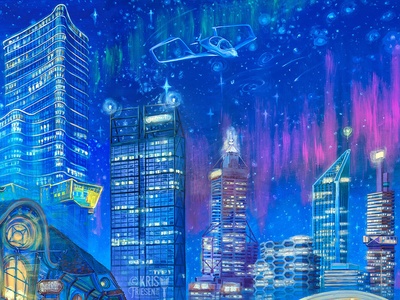 A modern skyline of contemporary architecture consists of buildings and towers throughout cities in Australia including Melbourne, Perth and Sidney. Painted from left to right are Australia’s 108 supertall skyscraper, the BHP Tower, the Central Park Tower, a conceptual honeycomb apartment building, the BankWest Tower, and an alternate version of the Australia 108 Tower, and almost cropped out, is the Eureka Tower. An innovative experimental Synergy Aircraft flies overhead. 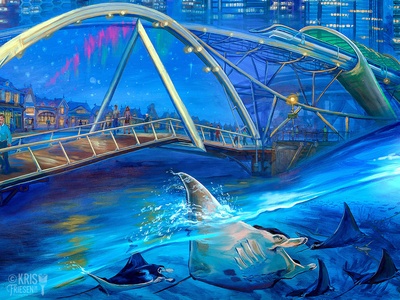 The Pygmy manta rays were painted with some of the tones I would normally use for painting people, mixed with ocean blues. The idea was to influence viewers into seeing their own skin in a distantly related species that we have disproportionate influence and control over; in certain fishing localities they are at risk. Above, pedestrians walk the Southgate Foot Bridge in Melbourne, Australia. 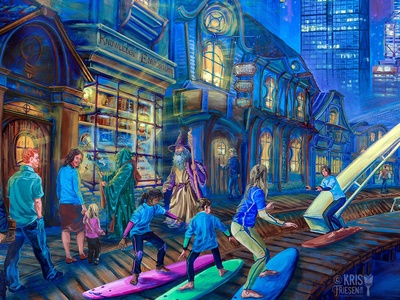 Tudor style architecture in the foreground of my mural artwork for Aurora Charter School vividly contrasts architectural time periods when compared to the modern background. The idea is to inspire students with mixture of our high-tech future and the magic of our traditions and past. 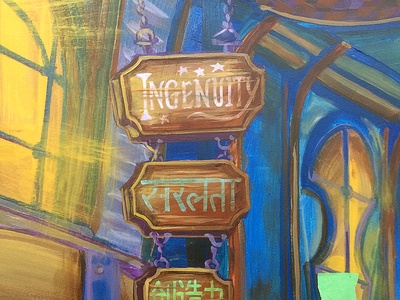 ‘Ingenuity’ is painted in English, Hindi, and Mandarin on the sign of one of the shops, suggesting this virtue is something that is within reach, as a patron (out of view) is about to enter the front door to get some. Art is a great way to influence kids and young people, and as an artist when I painted this school mural I added skills like ingenuity as tools that can be learned in hopes that students will literally have a different perspective on life skills. Creating this 12 foot tall school mural inside a studio at Qualicum Bay on Vancouver Island was a great time! Painting a mural to be lit by candles and lanterns provides a warm ambiance and adds to the magical mood with the wizards and fantasy boardwalk.