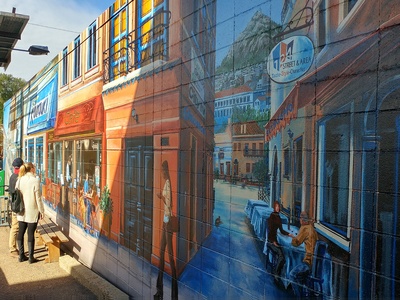 The public interacts with the street scene mural, which many enjoy for it's realistic 3d effect allowing viewers to almost walk into the painting. 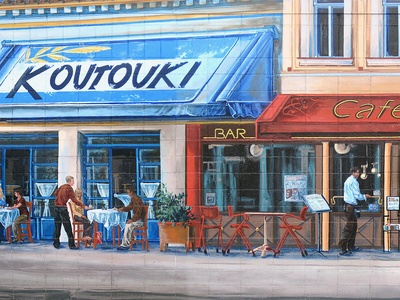 A thriving urban patio scene was painted as inspiration for what might come to the 124 St neighbourhood this mural was painted in. While the idea of turning the mural space into a real patio wasn't possible, Daravara Pub created it's own clever patio with a roll up door opening tables to the outside, only feet away from the mural. 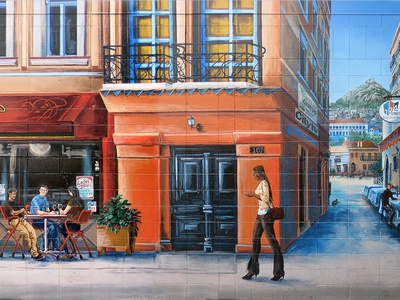 The bright orange classical buildings of Athen's streets open up to create a colourful alleyway, where a couple has drinks at a restaurant patio. Plaka, the area of Athens that inspired the mural, is known as the “neighbourhood of the Gods” because it's close to the Acropolis and other sites. In the far background of the mural Mount Lycabettus looks down at the rest of the mural. 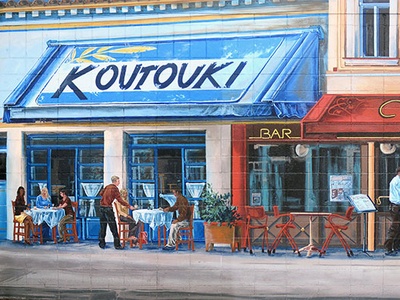 The finished mural at the Greek restaurant Koutouki in the 124 Street neighbourhood of Edmonton is a colourful streetscape of busy life in restaurants and cafes in Athens. 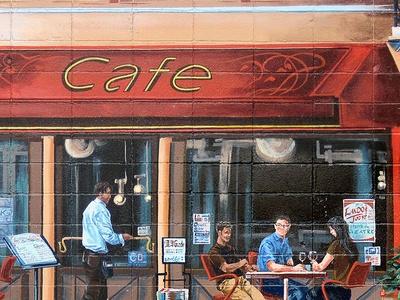 Moving inside to pick up a drink order, a waiter opens the cafe door painted in this Koutouki mural. Young guests enjoy glasses of wine outside on the patio beneath the bright red Cafe sign. 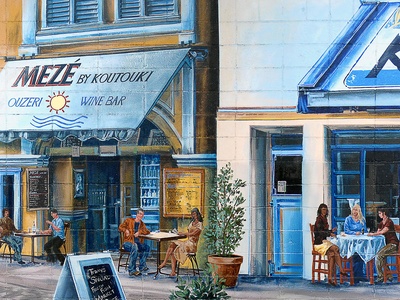 Visiting patrons enjoy drinks over conversation, hanging out on the patios of a Greek wine bar and restaurant. It was important to paint the right amount of figures in the mural; we didn't want it to look crowded, but to few people on a street scene can have a cold look. 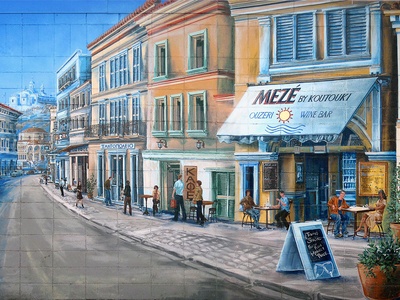 The Chapel of St George on Lykavittos Hill in Athens stands painted in the far background of this Greek mural. The Tzistarakis Mosque opens a distant street which bends around the corner and into the mural foreground with labyrinthine streets and neoclassical architecture. 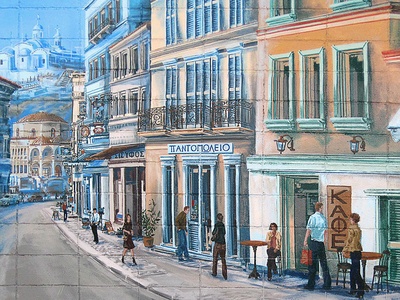 A wide open street entering Athens was painted in the bottom of the mural to match the real street and parking lot beside this mural, giving a 3D perspective to drivers and pedestrians. 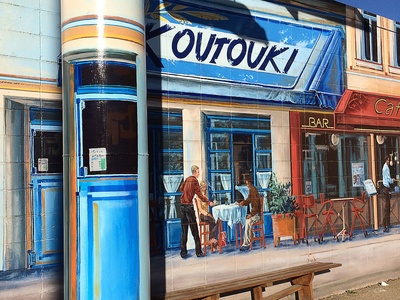 Rather than having a billboard pole block the view of the mural, my clients and I decided to paint it in as part of the mural. The result was a kind of paint camouflage, where the pole matches the mural and adds it's own depth of vision.