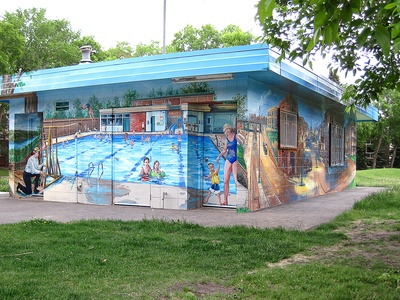 From a rail bridge to a busy day at the Oliver pool to Jasper Avenue, this placemaking building weaves in and out of different murals. The washroom door entryways were a worthy challenge for conflating the different scenes together, and I placed the pool at the top of a hill to make it blend with the other elements in a small transitional space. 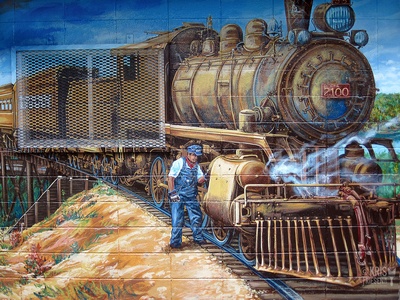 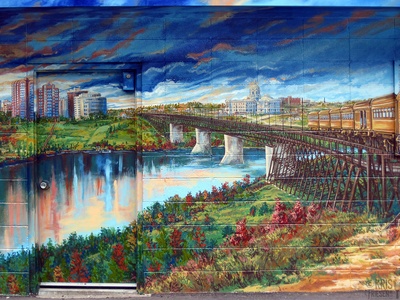 A bright, sweeping sky illuminates Edmonton's river valley where this mural painted right over the walls, doors, and even door jams. On the left side of the high level bridge are modern buildings in Oliver, while the right side goes back 100 years in time to show the Alberta Legislature Building when “the Ledge” was newly completed in 1913. 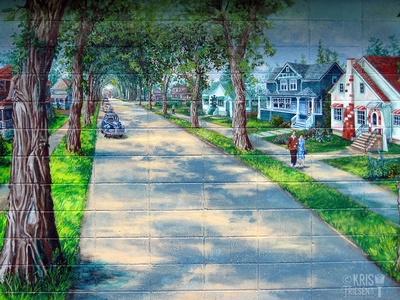 The social identity that defines the residential side of the neighbourhood of Oliver is found with these colourful character homes on 122 street. I wanted the mural to step back into Edmonton in the 1950s for this section, and the time period is given away with vintage cars and a couple with fun wardrobes from the era. 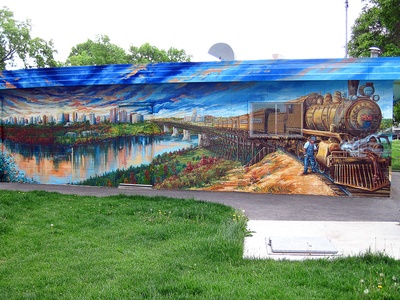 A crisp sunrise lights the Oliver district of Edmonton's modern river valley on the left side of this mural in Kitchener Park. The right side is lit with warm daylight as the High Level Bridge sees it's first train crossing in 1913 via CPR engine 2100. The golden light evokes a magical train ride as the bridge takes us back in time; behind the bridge on the river bank are turn of the century buildings. 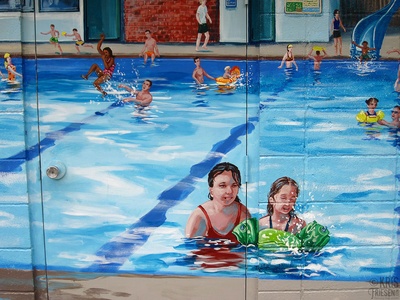 A mother is painted teaching her daughter how to swim along with other swimmers enjoying the Oliver swimming pool. This part of the mural is beside a public spray deck so I wanted to show families and kids playing in a fun water scene. 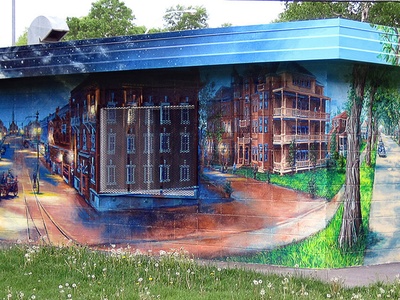 Using all surfaces of a public building as a pulic artwork is what placemaking is all about: connecting people with places. This mural is a kind of artwork island in the middle of a lush park with a playground and water play area. The perspective of the mural was designed with the horizon at standing eye level, where several vanishing points take us around corners and off into the distance. 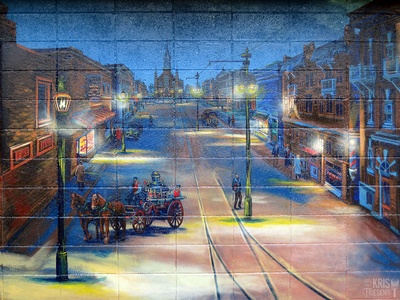 Turn of the century Edmonton fire fighters steer their horse drawn, steam powered fire wagon onto Jasper Avenue, headed back to their fire hall. Looking down a fictional street, many of Oliver's historical buildings are shown along side each other. Starting from left to right after the candy store are St. Joachims' Parish, the Rene Lemarchand Mansion, the Annamoe Mansion, and Derwas Court. 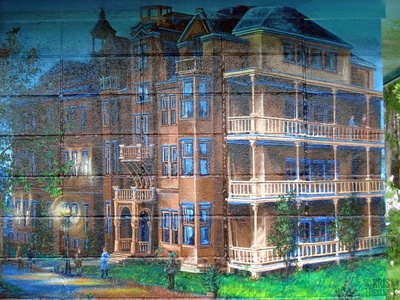 The original Edmonton General Hospital on Jasper Avenue closes this corner of one of the Oliver mural's walls. The top of the hospital is painted onto the roof, as I often “bent” the painting to show subjects on multiple corners, overhangs, and surfaces for this mural. 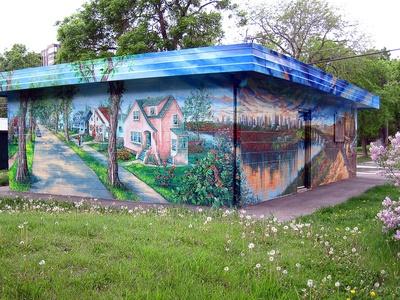 The character homes of Edmonton's 122 Street, shown in the 1950's, give way to the modern North Saskatchewan river valley and it's skyline. Each of this building's four walls are essentially their own stand alone murals, however they all flow into each other as the viewer walks around the building. As we can only see two walls at a time, the mural composition has to visually read well from all angles around the building. 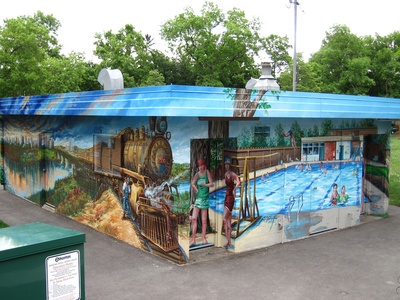 Turning every surface of a building into a mural was a rewarding challenge! Here we can see the vestibules, or door entryways that were painted on all sides for the public washrooms or change-rooms. The High Level Bridge train moves past the Oliver Pool, where public bathers from the 1920's and modern day enjoy a summer day, in front of the spray deck in Kitchener Park.