This was an amazing day with volunteers from the Kingsway district of Edmonton, including softball players, police, local business reps, and passers by. The mural was designed as an giant paint by numbers so that anyone could help paint, and did they ever! Normally projects unfold over over weeks and months, so it was inspiring to see everyone come together for just a few hours and leave behind a large artwork for our city.

A community event mural starts like any other mural, with my client describing their wishes in a public artwork. After writing an artwork brief, a detailed description of what the mural will include, the real challenge is to incorporate my client's ideas into a public mural that anyone can participate in painting! Painted at a prime location visible from busy Kingsway Ave in Edmonton, this mural is about the unique aspects that make up the Kingsway area. With a popular mall Kingsway is a shopping destination; having the Royal Alexandra Hospital Kingsway has become the Edmonton wellness centre; home to the RCMP Alberta Divisional Headquarters  and a healthy variety of businesses and organizations, the motto “it takes a community” encompasses the area of Kingsway.

Balancing complex imagery with all levels of volunteer painting abilities, I decided to take a visually graphic approach using solid hard lines and shapes with defined edges. The design for this mural was heavily influenced by South American street art, which is often bright with swooping shapes and lines adding to faces and objects within the mural. Using a graffiti inspired style gave a variety of visual possibilities that blended more detailed imagery, like figures, faces and buildings, with outlined shapes that brought the whole piece together as a composition.

Once the mural sketch was approved, the mural surface was prepared, in this case the back wall of a softball dugout that faces Kingsway Avenue. The mural in using solid black lines with closed shapes; upon a closer look every space had a surrounding edge, showing boundary lines like a colouring book. The faces and more complex areas were simplified in this way, while leaving room for expression if volunteers with more advanced painting skills showed up. When volunteers arrived they were directed to the mural wall outline, where they chose a shape they liked that had a paint soluble number written on it. Coming to my paint mixing centre, volunteers told me the colour number of their shape and after they chose from a variety of brushes, I gave them their specific colour of paint.

This planned painting approach produces a bee hive of busy volunteer painters that only takes a few hours for an entire wall mural to be completed. After the mural is finished by the public and if no advanced painters were in attendance, I paint the finishing touches on faces and figures. Upon completion this mural has realistic portraits, while over 80 percent of the artwork has only been touched with a brush by volunteers. 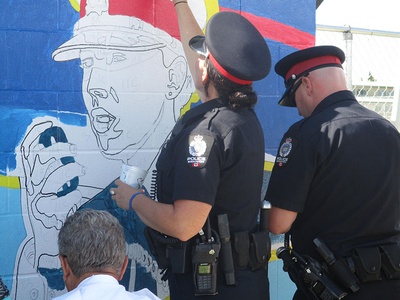