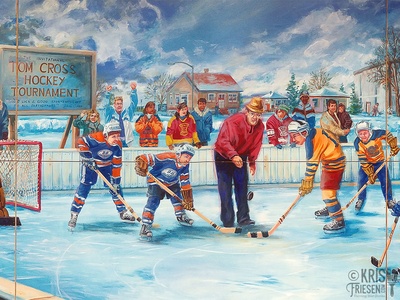 The Tom Cross Hockey Tournament is painted into action in this local history mural about Beverly youth sports teams. Tom and Milly Cross and Kathy Marson grew the tournament to involve the Mites kid's hockey group, eventually to 24 teams.

This winter youth sports mural depicts the Tom Cross Hockey Tournament and figure skaters, in the Edmonton neighbourhood of Beverly. Beverly parents and residents overcame adversity and kept things going in tough times as builders of sport for kids. 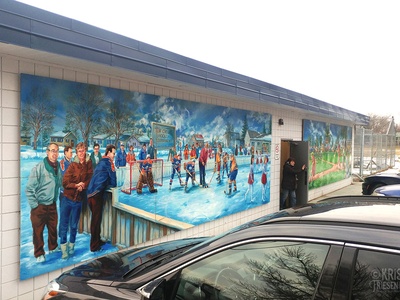 Two youth sports murals face off from each other between the entrance of the Rink Building at the Beverly Heights Community Leage. These Edmonton rinks have hosted hockey games and figure skaters for decades, which are celebrated in the mural. 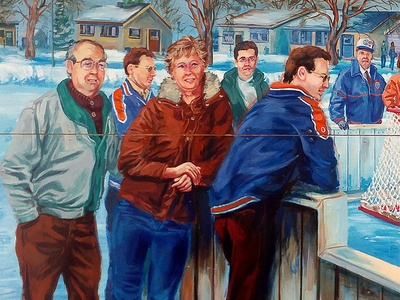 Spectators are painted watching the Beverly community hockey game in the 1980's in this left section of the mural. Most of the figures in the painting are portraits of Edmonton folks; from left foreground Harry Ewanik, Kathy Morrison and Cornel Rusnak. From left background: Dick Innis, unknown man, and Bob Wackenhut. 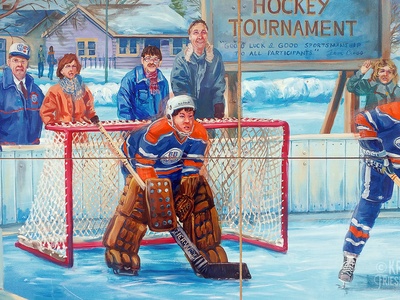 A teen hockey goalie guards the net for the BB Blazers in this mural about community sports in the Edmonton neighbourhood of Beverly. Portraits of the supportive spectators around the net include (from the left): Cornel Rusnak, Bob Wackenhut, unknown woman, Mr. Mozak and Gerald Woeling. 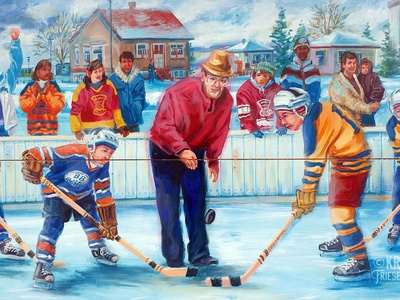 Tom Cross smiles and drops the puck in this Edmonton mural of a Tom Cross Hockey Tournament, taking place in Beverly during the 1980's. 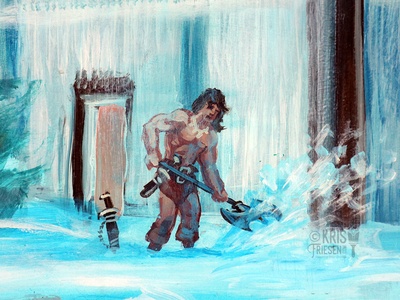 Conan the Barbarian shovels snow with a battle axe at the Beverly Heights Hall and Community Centre in the background of this Edmonton mural. 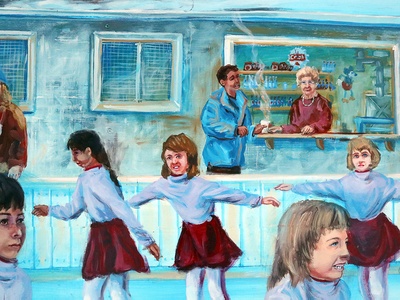