I have painted a lot of stories and subjects in murals before, but I believe this was the first origin of a love story. Depicting Chemainus Road looking south in 1945, the mural is actually at the same location painted in the scene, providing the viewer with a step back in time. This is the 45th of the Historical Mural Series for the Chemainus Festival of Mural Society's Outdoor Art Gallery.

The artwork shows the first moment that Russ Roe, shown as a smitten paperboy, noticed Aileen Heikkila, the girl riding her bike. Aileen is depicted wearing a blue dress while riding her bike home, however the wind has sent several envelopes that were in her basket flying into the air. Having seen everything from across the street, Russ came forward and helped Aileen collect her mail. Later in life Russ and Aileen were married, and raised their family in Chemainus. 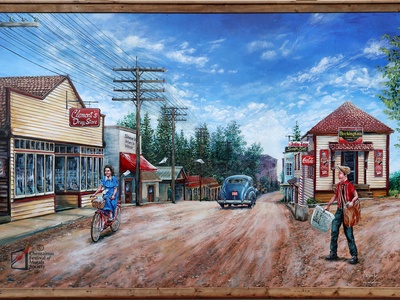 Chemainus Road Circa 1945: Mural in Progress 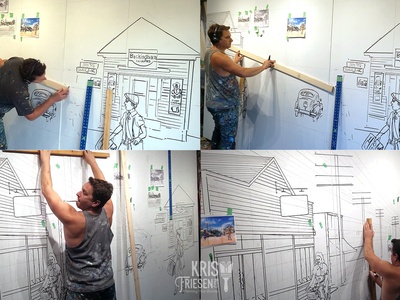