Bridge to the Wall: Chinatown Mural

The Bridge to the Wall Mural in Progress 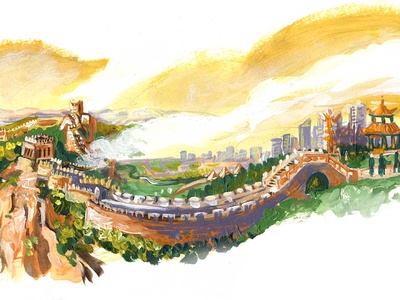 The final mural sketch was a small painting that brought together The Great Wall of China and Edmonton. At the time the mural was thought to be painted directly on the wall and it's borders would fade in and out like a tattoo design, rather than have rigid edges. This mock up was also much shorter, although the soul of the painted idea is shown. 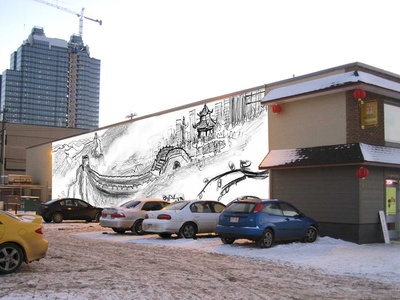 Kim Fat Market in the heart of Edmonton's Chinatown is a great example of small business success from dedicated hard work and catering to community needs. This early black and white mural sketch was photoshopped onto Kim Fat to give a rough idea of what the mural would look like on location. 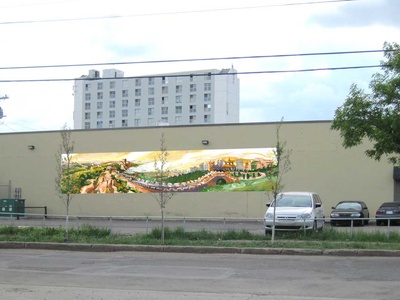 A photo composition of the revised and finalized sketch at home on Kim Fat Market in the heart of Edmonton's Chinatown. The initial size of the proposed mural was reduced to match a revised budget when the project was taken over by The Art & Design in Public Places Program (The Places), rather than insisting on a larger mural size and the neighbourhood having no mural at all. 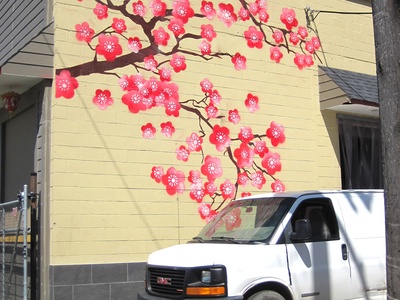 The Bridge to the Wall was an additional mural to Kim Fat Market, which already showcased the mural “Cherry Blossoms” on another wall, also funded by The Places Program. To compliment this earlier mural I painted cherry blossoms to the corner of the Great Wall mural. I had great help with the mural installation from Grace Law, lead artist of “Cherry Blossoms,” and other artists working with The Places Program.