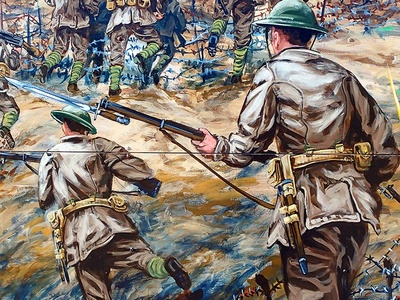 On the morning of Easter Monday 100 years ago, 15,000 Canadians seized Vimy Ridge for the Allies. On many occasions soldiers showed leadership, initiative, and extreme bravery as they were told to keep moving and outflank the German machine gunners. 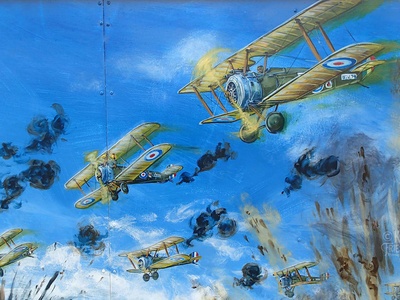 Royal Canadian Air Force Sopwith Camel Biplanes fly the skies of this WW1 mural, hardly a decade after the Wright Brothers flew the world's first controllable aircraft. With twin Vickers machine guns and a rotary engine the RCAF Camels were a fast aircraft for their time, although they were a real challenge for pilots to control. 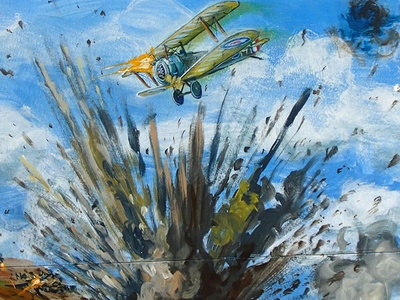 An RCAF Sopwith Camel aircraft fires on the mural's German positions. These brave, sometimes teenage, pilots who passed the “20 Minute Club” (so named for the life expectancy of a rookie pilot), still faced a final dangerous challenge: landing. Notice the lack of a rear wheel, just a tail skid. 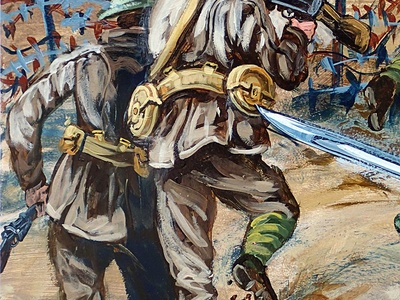 Soldiers run uphill to break through the German's formidable stronghold at, one of the men charging the painting with a Lewis Machine Gun. During the Vimy Ridge campaign four Canadians received the Victoria Cross and all of the divisions were regarded for their bravery. 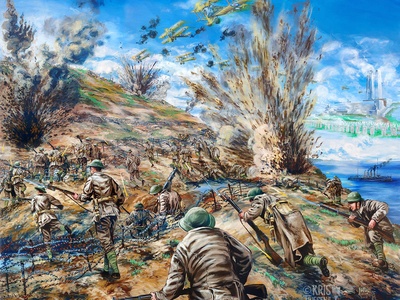 The Battle of Vimy Ridge saw Canadians advancing uphill against Germans defending their hardened positions. The mural depicts some of the terrible conditions Canadian troops would have experienced as they gutted out their rolling barrage. To emphasize the challenges soldiers faced I made the direction of the mural up and to the left, the most uneasy direction to look if viewed by a westerner, as we read left to right and downwards. 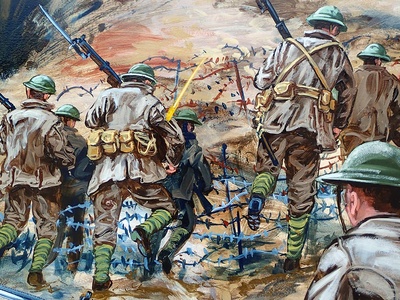 The Canadian infantry charges into No Man's Land, running through barbed wire and craters with 32 kilograms of equipment each. In hindsight I wish I had painted the soldiers in this mural wet with mud, as it has been said they carried as much weight in mud as their gear. 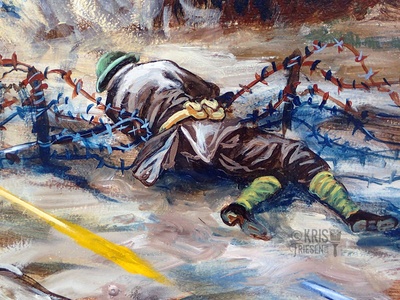 A Canadian First World War casualty is painted draped over a barbed wire fence he was caught on. Almost 60,000 Canadian soldiers perished in WW1 and another 170,000 were wounded. One of the deadliest of all conflicts, World War 1 had over 41 million casualties. 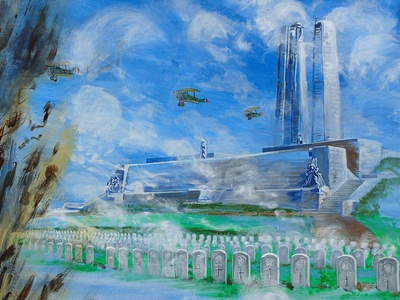 Today Vimy Ridge is home to a gigantic peace monument, which is painted ghost like in the sky of the mural suggesting what is to come. Designed by Walter Seymour Allward, an inscription at the Canadian National Vimy Memorial reads "to the valour of their countrymen in the Great War and in memory of their sixty thousand dead this monument is raised by the people of Canada." 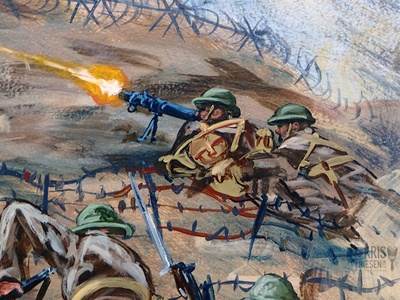 I painted a team of African-Canadian soldiers operating a Lewis machine gun as the first to return fire in the mural. Weighing 30 pounds without ammunition, the lewis gun was heavy enough to limit a soldier's advance uphill to one sprint; wherever he dropped would be the firing position. 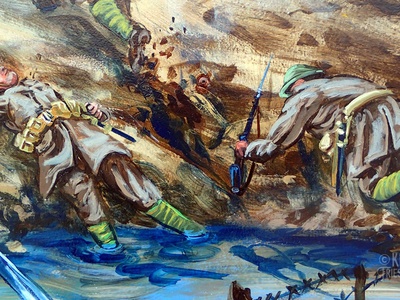 A Canadian WW1 soldier dives into a shell hole turned muddy pond beside his comrade who was just killed in action. Scrambling uphill through trenches and craters in the cold mud while being shot at seems like a different world today. 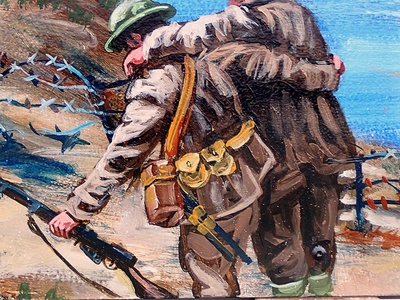 A wounded soldier is helped by his brother in arms to try and find cover. While the chaos of what it would be like advancing on Vimy Ridge would have seen every man scrambling uphill for himself, I paint scenes of self sacrifice where possible. 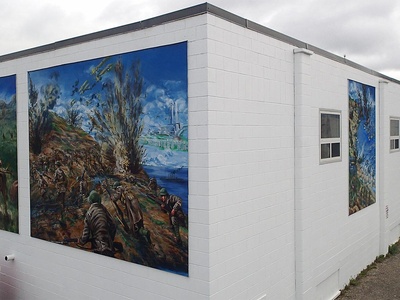 Installed at the Whitecourt Legion, the Vimy Ridge mural represents World War 1 in this outdoor military art gallery. There are 7 murals in total wrapping around the Legion building, providing a chronological summary of Canada's military history and missions.