This 12 foot high by 120 foot wide mural , 50 Years and Counting, depicts the 50th anniversary of the Mustang and a tribute to Edmonton’s last 50 years. As my client Empire Collision celebrated their 50th anniversary they wanted their story painted as community support; the triumphs, aspirations, and successes of Edmonton.

The mural transitions through 50 years of Edmonton moving from 1964 to 2014, and moving from the past on the left forward to the present on the right. This coincides with Empire Collision's 50th anniversary, so they decided to give back to the community with a mural that celebrates our town. There are six vehicles in total or one per decade, progressively becoming newer towards the right.

Starting on the left with the 60's we see the opening of the palisades in Fort Edmonton Park and one of the first Klondike Days. In the foreground is a 64 mustang and the captain of the Oil Kings with the 63 Memorial Cup.

Moving left to the 70's are the opening of the LRT, the CN Tower, Commonwealth Stadium, and Grant MacKewan University in the background. In the foreground is a 74 mustang, athletes competing at the Commonwealth Games, and the Edmonton Eskimos with 5 grey cups.

For the 80s we have Rexall Stadium in the background along with several towers and buildings from that era. In the middle-ground lies one of the first Edmonton Folk Festivals. In the foreground are Wayne Gretzky, Grant Fuhr, Yari Kurri, Mark Messier, and Paul Coffey, each with a Stanley Cup from that era. Also in the foreground are Richard Petty's 1984 Nascar vehicle and Terry Wickham sitting in the grass.

The background for the 1990s and 2000s blend together, where we have the Fringe Festival and the opening of city hall. In the foreground are Dale Ernhardt's 1994 Nascar car and an 04 mustang, as well as a fringe performer and the Oilers playing the Canadians at the 03 Heritage Classic.

For the present the background includes the Art Gallery, Epcor Tower and the lighting of the bridge, while the 2014 anniversary mustang is in the foreground. Aaron Irving of the Edmonton Oil Kings closes the mural with the 2014 Memorial Cup, 51 years after the oil kings on the other end of the mural. 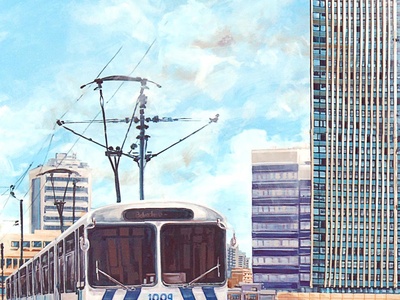 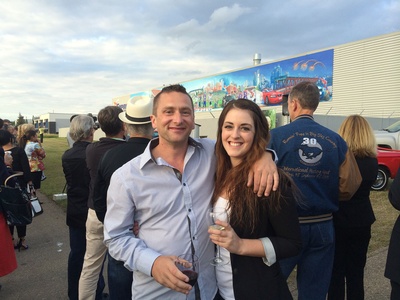 50 Years and Counting: Mural in Progress 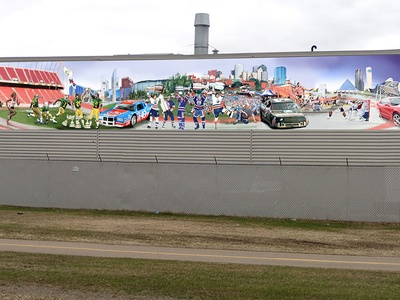