Opportunity of Vicuña: Wildlife of the Andes 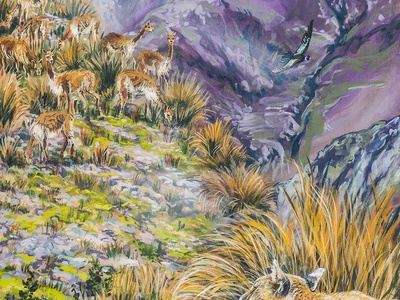 Set in a high alpine ecosystem of the Peruvian Andes, this artwork depicts a puma or mountain lion stalking a herd of vicuña, a wild relative of the llama. An Andean condor flies in the background, knowing this location may hold enough remains for a future meal, if the puma can make a kill. 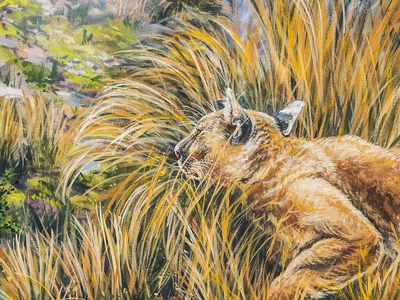 The puma, also known as the cougar and mountain lion, has the largest range of any land mammal in the western hemisphere, from the Canadian Yukon to the southern Andes. While the puma in this painting demonstrates how to ambush larger prey, the species is a generalist predator and will eat wildlife as small as insects. 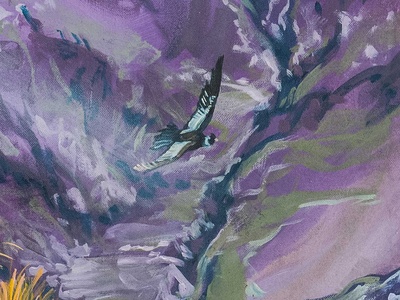 An Andean condor flies against a purple hued backdrop of the Andes in this wildlife painting. The largest flying bird in the world, this condor has a wingspan up to 3.3 meters or 10 feet 10 inches, is also one of the longest living birds, aging up to 70 years. While the Inca believed the condor brought the sun into the sky every morning, these birds can soar so long in flight that Charles Darwin said he watched one for half an hour without a flap of it's wings. 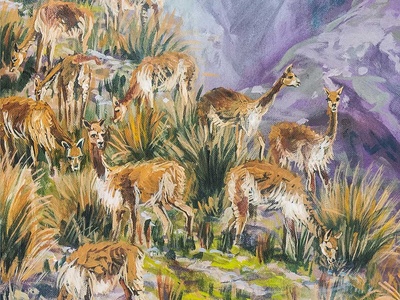 The wisely cautious vicuña in this painting belong to the camelid family, and are relatives to camels, llamas, and guanacos. Not having painted wildlife like them, it was fun to create the long, thick coats these animals have, which traps layers of warm air close to their bodies. Vicuña wool is known as the rarest, finest fibre in the world, and while sacred to the Incas (who only let royalty wear vicuña wool), by the 1960's there were only 6,000 of these animals left. Conservation has since helped this national animal of Peru. 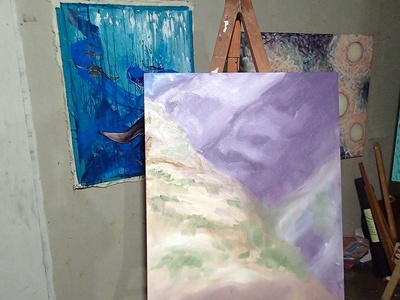 The rough early stages of the painting that would become “Opportunity of Vicuña,” in the studio where it was made, at Sachaqa Centro De Arte in San Roque de Cumbaza, Peru. I paint landscapes as quickly as possible during early stages, to capture the essence of a location with lighting and not worry about details. 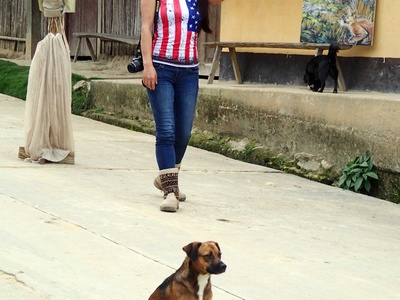 “Opportunity of Vicuña” was part of a pop up art exhibition that briefly occupied the main street of San Roque de Cumbaza in Peru. A wild and talented fashion designer, Shan Wang showcased one of her dresses on an expressive mannequin. While the town dogs where the first to check us out, their owners did eventually as well.